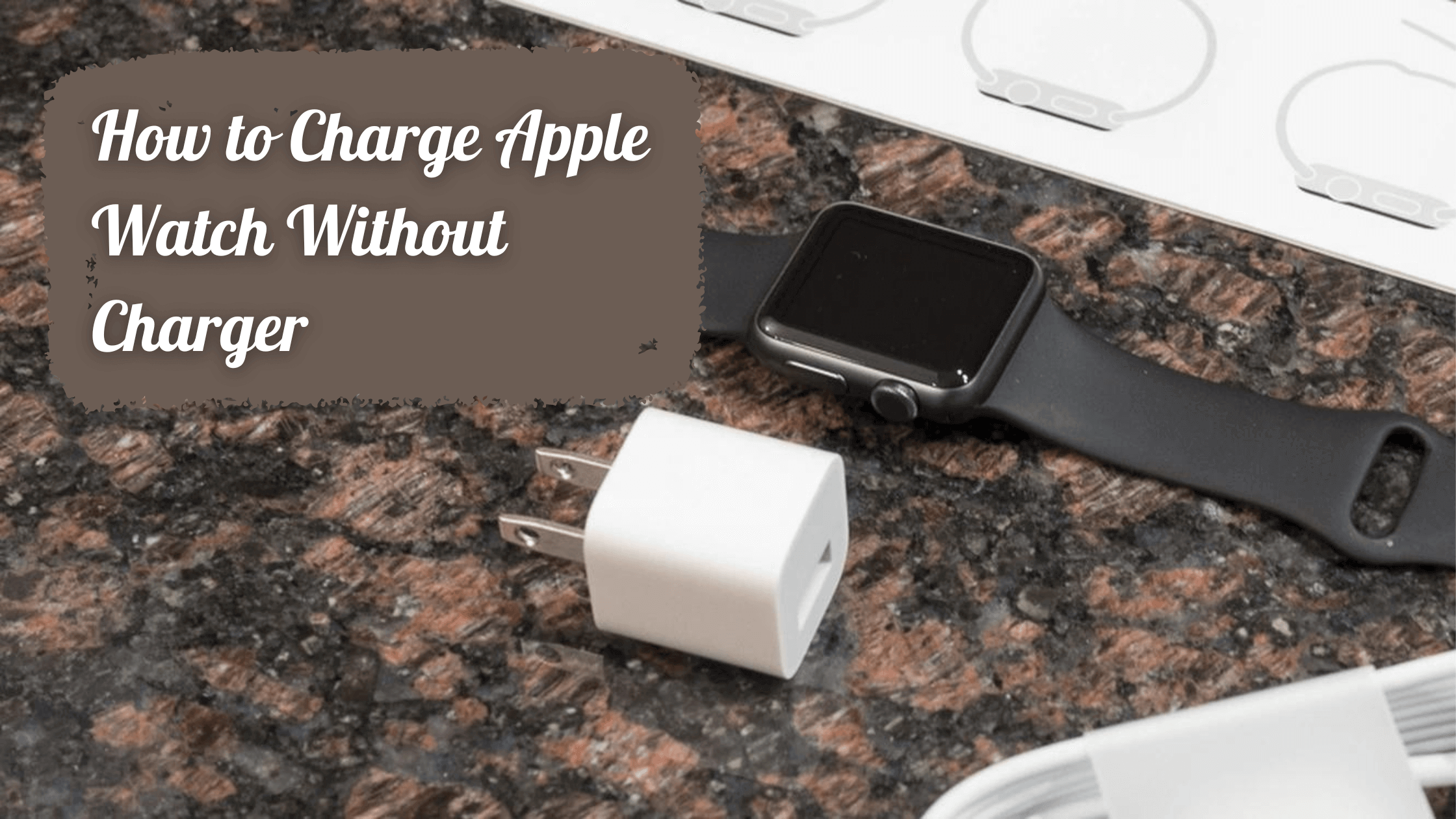 Have you lost your charger, or somehow your adapter is not working anymore, and with that, your apple watch battery just died? If you’re suffering from this situation, then I know how much desperate you must be to find an alternative way to charge your apple watch.

Not long ago, I was also in a similar situation, and when I looked for the solution all over google and youtube, I didn’t find one even on scouring all over the internet.

Such a situation is quite frustrating, but what if I tell you that I have found a way? I was lucky enough to have a geeky friend who taught me some ways to charge it. A simple trick that you can use to charge your apple watch while it’s out of the charger. This trick is not as efficient as charging through an official apple adapter for the apple watch, but I am going to tell you that this trick really works and will give you the desired result.

In this guide, I will show you 5 different methods of charging your apple watch that doesn’t require an adapter.

There are 2 parts to an Apple charger:

Most of the time, only the adapter is faulty, and not the cable. This is why the first 3 methods given below are focused primarily on a fault adapter.

But if somehow the magnetic cable is damaged or lost, then you can skip the first 3 methods & jump directly to the next one.

How to Charge Apple Watch Without Charger

Here are the methods which you can use to charge your apple watch when you have a faulty charger. Let’s check them one by one:

1. Use your computer’s USB port

One of the simplest ways to charge your apple watch is to use your computer’s USB port. All you need is a standard USB type C to type A if your computer doesnt have any USB type-C port in it.

This method is very convenient if you’re at home or at work and have access to a computer. However, it’s not very practical if you’re on the go, as it would be difficult to lug around a computer or laptop just to charge your apple watch!

2. Use an iPhone charger or iPad charger

If you have an iPad or iPhone charger, then you can use it to charge your apple watch. The steps are similar to the method we discussed above, but instead of using a USB port on your computer, you’re going to use the charger.

To do so, plug the USB type-C end of the magnetic charging cable into your iOS device’s adapter port and plug the adapter into your wall socket. Thanks to Apple’s inductive charging feature, your Apple Watch will not take long to start charging through this method. It’ll charge fast and with no fuss at all.

Another great way to charge your apple watch without a charger is to use a portable battery pack. This is an ideal solution if you’re on the go, as you can easily carry a battery pack in your bag or pocket.

There are many different types and sizes of battery packs available on the market, so you can choose one that best suits your needs.

The only drawback of using a battery pack is that you have to charge it after every time you use it manually, or else it’ll not be able to charge your watch anymore.

4. Use a Qi-certified wireless charger

If your apple watch is running on the WatchOS 5 or later, you can use a Qi-certified wireless charger to charge it without a charger. This is a very convenient solution, as you don’t need to buy a new charger or keep an extra Apple Watch charging cable at all times. You can easily charge your apple watch wirelessly!

If you are not familiar with wireless charging technology, then you will be glad to know that Qi is a standard for wireless power transmission. Both your apple watch and the Qi wireless charger must have an inductive magnetic device to work.

5. Use a car charger

This will work with any car charger that has a USB port.

Back in 2015, there were various youtube videos claiming that there’s a hidden six-pin port in the apple watch that can be used to charge the watch without a charger that too at a much higher speed than its normal magnetic charger.

To satisfy your curiosity, I can tell you that the port underneath the watch strap is real. There was a pinhole behind one of the straps, and you could open it by inserting a needle in that hole (just like a SIM card tray).

There was a lot of speculation about that port, but it turned out to be a diagnostic port used by Apple professionals to diagnose watch issues.

After much research, it was found that this port does far more than just diagnose. Various companies came out with projects which claimed to charge the Apple Watch without a charger. As an example, I have listed the top 2 projects in this category below.

A company named “Reserve Strap” made use of this hidden port on the apple watch to launch their straps that charge the watch even while you are wearing it. Soon after its launch, Apple removed the hidden port from newer Apple Watch models, and the concept died with it.

While there was a buzz about the hidden port, another company named “Togvu” came up with the concept of charging using the strap in 2019 and named its project “Batfree Power straps”. The company was working on creating straps compatible with the Apple watch series 2/3/4, and on funding its project, it started with Kickstarter, where people can pre-order the straps.

Despite all the back orders, the project never materialized, and all 694 people who ordered it never received it. As a result, Kickstarter discontinued this project.

Starting with the Apple watch series 7, Apple has removed the six-pin hidden port, and there is no official news that it will return, so there will be no way to charge the watch without a charger.

Third-party hardware developers took advantage of the port and used it as a charging port without knowing the damage they were causing to Apple watches. The port was only intended to be used for diagnosis, but many of them used it as a charging port anyway. As a result, Apple took the initiative, and it even fixed this loophole with the watchOS 2.0.1 update, and the port was later removed from the latest apple watch models.

Can you charge your apple watch without a magnetic charger?

No, you can’t charge your apple watch without its official magnetic charger.

Can we use a laptop to charge the apple watch?

Yes, you can use your magnetic cable with your apple USB port to charge your apple watch.

How to know when to charge your apple watch?

There are many ways to charge your apple watch without an adapter. However, some of them require you to have a particular piece of equipment or tools you might not have with you.

The next time you find yourself in a situation where you have no charger and are desperately looking for an alternative way to charge your apple watch, make sure to try one of these 5 methods discussed above.

If nothing works for you, then the only thing left is to take your Apple Watch to a professional or to the Apple store and see if they can help. If you’re running a bit late, then you can also ask your friend for some help with the charging, and if you’re lucky enough, they might have a spare charger for you.

I hope that these methods will help you with your apple watch charging problem. If you have any other problems, please let us know in the comments section below.